A school shooting in snowbound Vermont; an American journalist beheaded in war-torn Syria; a passenger jet exploding in the Thai jungle—everything connects to Kate Swift, CIA assassin turned whistleblower, on the run from a sinister intelligence unit.

With her six-year-old daughter, Suzie, she flees across the Canadian border to begin a perilous journey to Berlin and then Thailand in search of the only man who can keep them alive: Harry Hook, a disgraced ex–CIA case officer living rough in the wilderness, battling the bottle and ghosts from his past.

Can Hook conjure an inspired but desperate plan that will save Kate and Suzie and bring him the redemption he yearns for?

“As hard as nails, fast-paced, and precise.” —Playboy (Germany)

“A political thriller that is suspenseful from the first page to the last.” —Stern (Germany)

“A high-tempo thriller set in the shadowy world of espionage and off-the-books covert ops with a thrilling conclusion in Thailand.” —Crime Fiction Lover

“The tension builds wonderfully, aided by nice descriptive touches…and a quirky way of building atmosphere and character through smell.” —Booklist

“With hairpin plot twists and sharp prose, The Truth Itself grabs you by the throat and never lets go. Roger Smith, writing as James Rayburn, has a gift for creating real people caught in impossible circumstances instead of the usual paper targets. Anyone who wants a thriller that actually thrills needs to pick up this book.” —Christopher Farnsworth, author of Flashmob and Blood Oath

“The Truth Itself is a stunner; an intimate story that plays out against an international canvas with characters caught up in events bigger than themselves, their lives intertwining and colliding like a mortar shell in a market, leaving the reader breathless with fear and hope. An intense, fast-paced, complicated thriller, The Truth Itself will challenge readers’ minds and hearts. Highly recommended!” —Karen Dionne, internationally bestselling author of The Marsh King’s Daughter

“James Rayburn has written one of those rare thrillers that combines a breakneck pace and unforgettable characters with searing political commentary. He ditches the usual clichés of espionage novels and constructs a truly jarring and inventive plot. From the harrowing opening scene of a school shooting in rural Vermont to the final twist that I never saw coming, this is an unputdownable novel that I can’t recommend enough.” —Jon Bassoff, author of Corrosion, nominated for the Grand Prix de Littérature Policière

“Graham Greene would have appreciated The Truth Itself. There is a complex moral and political vision at the heart of this novel. James Rayburn knows how to make readers turn the pages, except for the times they pause to savor the quality of the prose. This is one finely calibrated thriller.” —Lynn Kostoff, author of Words to Die For and The Long Fall

“Rayburn…writes with great wit, assurance, precision, and flair, capturing readers from the very first sentences of this extraordinary thriller. Every character is a standout, each with a unique voice and intricate backstory.” —Mystery Scene magazine

“Rayburn sets up the book as a race against time, Kate and her team versus Benway and his. The highly effective page-turning speaks to Rayburn’s earlier career as a South African filmmaker…The force of character that Kate Swift provides gives a new notion of what a woman can accomplish as an agent—and a mom…Often violent but not particularly gruesome, The Truth Itself is a classic-style spy and escape adventure. It’s a good read, with engaging characters, and the final scene hints at a possible sequel in the works. That would be excellent news.” —New York Journal of Books 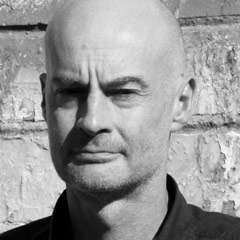 Tom Taylorson is an Earphones Award–winning narrator and Chicago-based actor with over a decade of stage experience. In that time he also built a voice-over career and now primarily works as a voice actor. Tom is an adjunct faculty member at Columbia College Chicago, teaching voice-over for interactive media.