The Orchid and the Emerald

Search for the Cure

William Gunn wants nothing more than a quiet life. After returning home from the Napoleonic wars, he accepts a position on the Duke of Devonshire’s idyllic estate. Destiny, however, intervenes when his young daughter Sarah falls prey to a mysterious sickness, and Gunn must strike out once more into the unknown and search for an unusual cure—the black orchid, a plant found only in the forbidding Amazon rainforest, where the last man who saw it went insane.

Across the Atlantic, American frontiersman Nathanial Yankee has left his country and his past behind to join a new revolution, fought by General Simón Bolívar to free South America from the Spanish. Nate, however, is no hero—he fights for land, and a chance at a fresh start.

Pursued by a cruel enemy in a race against time, William and Nate must survive the battlefields of the Spanish Main, cross the snow-covered peaks of the Andes, and finally reckon with the rulers of a dying Amazonian empire. For one man, the goal is a chance to save his daughter’s life; for the other, a priceless treasure beckons. If they cannot learn to work together, one of a thousand enemies will kill them (that is, if they don’t kill each other first).

Unbeknownst to them, both men are pawns in a far larger game, and some secrets cannot be hidden forever …

“A wonderful historical adventure, The Orchid and The Emerald was difficult to put down once I started. From the Duke’s quiet, but unsettling English manor house, to war-torn South America, I was captivated by unending, white-knuckled spectacle and danger. I highly recommend The Orchid and The Emerald as a story which will leave you smiling and satisfied, but craving the sequel.” —Maxine Paetro, New York Times bestselling author

“If you want a deep dive into the machinations of post-Napoleonic England, or a trek through Simon Bolivar’s South America, then The Orchid and the Emerald is that book! Timothy David Mack has captured the essence of these disparate worlds and transported us there through the eyes of two very different men, following different paths to the same destination. A rousing tale!” —Brian O’Neill, author of City of Destiny

“The Orchid and the Emerald drew me in from the first page. Timothy David Mack has crafted a meaty, majestic adventure, spanning continents and offering a glimpse into the grand game of espionage and intrigues between empires. Dive in and enjoy!” —James R. Benn, author of the Billy Boyle WWII mystery series 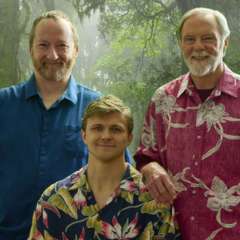 Timothy David Mack is the pen name of Kevin McNeill, David McNeill, and Tim Wendland. Kevin McNeill graduated from Manhattan College in New York, served on a blue water research vessel, then worked with Saudi Aramco in Arabia. He lives in Boise, Idaho. David McNeill, born in Jeddah, graduated from Yale and works as a software engineer in Boise, Idaho, where he enjoys writing fiction in his spare time. Timothy Wendland, from the Bay Area, served with the Coast Guard, became a merchant seaman, then left the sea to manage a loan fund. He lives in Boise, Idaho.

Ralph Lister is an actor, voice actor, and AudioFile Earphones Award–winning narrator. He spent fifteen years in London theater before moving to the United States to focus on film and television. He has held numerous roles in Shakespeare and modern dramas, as well as starring roles in independent films. His voice and character work can be heard in Disney’s Pirates of the Caribbean: The Curse of the Black Pearland 13 Going On 30. He lives in Los Angeles.