Longlisted for the 2021 PEN/Hemingway Award for Debut Novel

Longlisted for the 2021 PEN/Hemingway Award for Debut Novel

On June 23, 1911—a summer day so magnificent it seems as if God himself has smiled on the town—Fall River, Massachusetts, is reveling in its success. The Cotton Centennial is in full swing as Joseph Bartlett takes his place among the local elite in the parade grandstand. The meticulously planned carnival has brought the thriving textile town to an unprecedented halt; rich and poor alike crowd the streets, welcoming President Taft to America’s “Spindle City.”

Yet as he perches in the grandstand nursing a nagging toothache, Joseph Bartlett straddles the divide between Yankee mill owners and the union bosses who fight them. Bartlett, a renegade owner, fears the town cannot long survive against the union-free South. He frets over the ever-present threat of strikes and factory fires, knowing his own fortune was changed by the drop of a kerosene lantern. When the Cleveland Mill burned, good men died, and immigrant’s son Joseph Bartlett gained a life of privilege he never wanted.

Now Joseph is one of the most influential men in a prosperous town. High above the rabble, as he stands among politicians and society ladies, his wife is dying, his sons are lost in the crowd facing pivotal decisions of their own, and the differences between the haves and have-nots are stretched to the breaking point.

Spindle City delves deep into the lives, loves, and fortunes of real and imagined mill owners, anarchists, and immigrants, from the Highlands mansions to the tenements of the Cogsworth slum, chronicling a mill town’s—and a generation’s—last days of glory.

“In Spindle City, New England of a century ago is reborn a riot of cotton bales and quahog bushels, toboggan rides and Model Ts. Whether we find ourselves amidst the euphoria of a city-wide carnival or within the hearts of his grieving, striving characters, Jotham Burrello isolates, in the particularities of this lost world, timeless lessons about loyalty, ambition, and human resilience. A roaring debut.” —Nathaniel Rich, author of King Zeno and Odds against Tomorrow

“With Spindle City, Jotham Burrello sets himself the seemingly impossible task of anatomizing pre–World War I America through the prism of a single mill town—and succeeds resoundingly. This portrait of desires and discontents radiating outward from the poorest families to titans of wealth recalls Ragtime in its sweep and brings our past to achingly present life.” —Louis Bayard, author of Courting Mr. Lincoln

“Saga fans on a time crunch will find in Burrello’s debut many of the appeal factors without the typical multivolume commitment.” —Booklist

“In the grand tradition of E. L. Doctorow and Paula McLain, Jotham Burrello’s assured debut novel blends historical reality with invention as he creates textile mill owner Joseph Bartlett, who stands astride a world on the narrow edge of dangerous change. Even as Bartlett revels in his prosperity, he mourns his dying wife, and as union agitators are pitted against bosses, his sons are overtaken by the horrors of World War I. What could be a catalog of momentous events springs to life as Burrello infuses his characters with passion and humanity.” —Jacquelyn Mitchard, author of The Deep End of the Ocean

“Love, friendship, thievery, abuse, robber barons, rotten teeth, the smell of hot nuts at a summer parade, and the decline of the great New England textile mills: Spindle City has it all. A delight to the intellect, the emotions, and the senses.” —Emily Barton, author of Brookland and The Book of Esther

“In Spindle City, a delicately embroidered novel stitched with intrigue, author Jotham Burrello reimagines the early twentieth-century heyday of Fall River, Massachusetts, through the rise and fall of textile manufacturer Joseph Bartlett—a man beset by two wayward sons, the winds of labor agitation, and a secret he carries like a millstone. From the Portuguese laborers on the shop floors to the Yankee Brahmins in the city’s exclusive Highlands, Burrello captures the bustling spirit, complex social mores, and cutthroat underbelly of a lost world with a pitch-perfect ear and a generous heart. For those who enjoy their literary fiction with a historical weave, Spindle City rivals the best of E. L. Doctorow or A. S. Byatt. A stunning, stylish debut from an author who has mastered both the nuances of William Howard Taft’s America and the intricacies of the human condition.” —Jacob M. Appel, author of The Liars’ Asylum, Millard Salter’s Last Day, and many others

“The book explores working-class America and the vast divide between employer and employee. It is also about secrets, family, and dreams and expectations…It is clear that the author engaged in in-depth historical research, as it evokes the feel of the mill town from a century ago and provides the reader with interesting context.” —Historical Novels Review

“This well-crafted historical novel also succeeds in balancing big ideas about social justice, particularly regarding class, with tight plotting…It is a nuanced portrait of both the ruling and working classes in a highly interesting time and place in American history.” —New City Lit 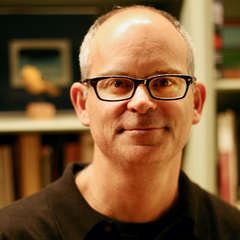 Jotham Burrello is a writer, teacher, publisher, farmer, and multimedia producer. He is the author of the Writers’ e-Handbook and producer of So, Is It Done? Navigating the Revision Process. Other writing has appeared in literary journals, the Christian Science Monitor, and he’s a proud winner of the New Yorker Caption Contest. He teaches writing at Central Connecticut State University, directs the Yale Writers’ Workshop and the Connecticut Literary Festival, curates the Roar Reading Series, and is the publisher of the award-winning Elephant Rock Books. He and his wife raise boys and flowers on Muddy Feet Flower Farm in Ashford, Connecticut.

Gary Galone comes to audiobooks as an actor, having been in the Screen Actors Guild for twenty-five years. His television credits include The Americans and the ABC/Hallmark movie The Makeover. In addition, he has performed in numerous voice-over projects. Galone resides in Massachusetts with his wife and their three daughters.