An Amazon Editor’s Top Pick in Fiction
A Women.com Pick of Winter Must-Reads
A Historical Novels Review Editors’ Choice
A Brit + Co Pick of Historical Romance Novels
A BookBub Editors' Pick of Must-Read for Fans of Downton Abbey
A Create & Cultivate of Summer Reads
A LifeSavvy Pick of New Books
A Beyond the Bookends Pick of Best Books Like Downton Abbey
A Ms. Career Girl Pick of Historical Novels
A She Reads Pick for January
A PopSugar Pick of Most Anticipated Upcoming Books
A BookRiot Pick of Most Anticipated New Books
See All +

For fans of Downton Abbey and The Crown … welcome to Hotel Portofino, where romance, revelry, and intrigue await.

Hotel Portofino is now a six-episode TV series that began airing on PBS on May 19, 2022.

Hotel Portofino has been open for only a few weeks, but already the problems are mounting for its owner Bella Ainsworth. Her high-class guests are demanding and hard to please. And she’s being targeted by a scheming and corrupt local politician, who threatens to drag her into the red-hot cauldron of Mussolini’s Italy.

To make matters worse, her marriage is in trouble, and her children are still struggling to recover from the repercussions of the Great War. All eyes are on the arrival of a potential love match for her son Lucian, but events don’t go to plan, which will have far-reaching consequences for the whole family.

Set in the breathtakingly beautiful Italian Riviera, Hotel Portofino is a story of personal awakening at a time of global upheaval and of the liberating influence of Italy’s enchanting culture, climate, and cuisine on British “innocents abroad.”

“If you love period dramas like Downton Abbey and The Crown, then you need to read Hotel Portofino by J. P. O’Connell immediately.” —PopSugar

“Set in the stunning Italian Riviera and reminiscent of Downton Abbey, and soon to be a PBS original, Hotel Portofino will capture your heart and have you flipping through the pages faster than you’ll ever be able to make hot cocoa.” —Women.com

“O’Connell’s historical novel, brimming with drama, romance, and intrigue set on the beautiful Italian Riviera during the 1920s, is perfect for fans of Downton Abbey. It also includes a diverse cast of characters and deftly addresses the prejudices of the era.” —Library Journal

“Scenes are short, the movement swift, and the language draws less from impressionism than pointillism in its ability to build sweeping emotion from a few pointed strokes. The action moves gracefully from comedy to heartbreak, melodrama to dramatic suspense. Charged adventures involving late night escapes, assignations, and art theft balance quieter moments that capture human kindness and the beauty of a passing world. A charming, moving, and memorable debut, highly recommended.” —Historical Novels Review

“In the genre of Agatha Christie, Henry James, Edith Wharton, this story delights. The author’s descriptions of Portofino are lovely, the characters fully formed. And the story whispers a warning—beware the subtle ways in which freedom can be lost.” —Pamela Binnings Ewen, bestselling author of The Queen of Paris

“This book will likely become another hit period drama series for PBS in 2022, after its British launch last year, and it will be no surprise to anyone who listens to the audio version of this book…The period evokes the style of Downton Abbey with the charm and warmth of the Italian coast. With so many characters, it takes a great voice actor to help listeners keep them straight. Esther Wane does just this with a delightful British accent as well as dialects that are appropriate for the characters. Highly recommended.” —Library Journal (starred audio review) 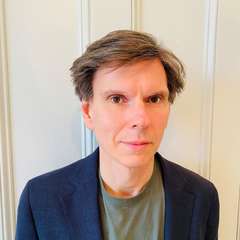 J. P. O’Connell has worked as an editor and writer for a variety of newspapers and magazines including Time Out, The Guardian, The Times, and the Daily Telegraph. J. P. has also written several books, including a novel, a celebration of letter-writing, a spice encyclopedia, and, most recently, an analysis of David Bowie’s favorite books and the ways they influenced his music. J. P. lives in London.