She got away once, but will LA detective Sam Carver let killer Dylan Cross escape again?

Los Angeles is not itself. Rain falls hard every day. Homeless men are set on fire in their tents. Detective Sam Carver chases leads into a maze of militias and neo-Nazis. But before he gets too deep into the case, a past that has haunted him for years returns in the name of Dylan Cross. The killer who got away. Carver knows she has murdered again, but no one believes him. She leaves him clues, writes him notes, tempts him. She wants him to betray everything he is. He is drawn to her by the damage and demons they both carry. But he is certain that when they meet again, only one will survive. This is a love story of delusion and obsession, and how the dark things we desire reveal the truths that made us.

“A fitting conclusion to the Det. Sam Carver series, which across three books have cast Los Angeles in fresh shadows of neo-noir.” —Los Angeles Times

“Fleishman’s writing is classic LA noir…He takes us on a tour of the big city’s underbelly and those who populate it and profit from it…The ending is spectacular.” —Florida Times-Union

“Fleishman expertly balances brutal crime scenes with poignant observations on love and loss in his excellent third and final novel featuring Det. Sam Carver of the LAPD…Intelligent characters, credible situations, and elegant prose: this book has them all. Readers will eagerly await Fleishman’s next.” —Publishers Weekly (starred review)

“[Fleishman’s] style, his vocabulary, and his ability to engage the reader leave no page unturned. His fans will expect another winner soon.” —New York Journal of Books

“From the first page My Detective moves as smooth as a bullet train through the shadowy world of night. Its hypnotic prose and scintillating characters guarantee that once you’re on board you’ll be riding this one to the end.” —Michael Connelly, #1 New York Times bestselling author, on My Detective

“Carver is a complex, laconic, melancholy figure, and Fleishman…paints him in nuanced detail and lovely prose. Equally well evoked is the city itself. We’re deep in Raymond Chandler territory here, a land of mean streets and tarnished heroes.” —Seattle Times on Last Dance

“The writing is intermittently gorgeous: ‘a city of ghosts, bright as paper lanterns.’ The detective chats about Mozart, Bernini, and The Great Gatsby. The final confrontation between cop and killer isn’t just written, it’s orchestrated.” —Booklist on My Detective

“The Sam Carver series is page-turning contemporary noir at its finest. Fleishman’s novels take readers on an unforgettably atmospheric and riveting ride. It’s a haunting fever dream you won’t want to wake up from.” —Will Staples, author of Animals

“Fleishman’s writing style is reminiscent of the 1940s style of the likes of Raymond Chandler, and yet Fleishman seems to take it one step further. The story is alive; it breathes; every paragraph brings the reader a sense of being there, of being Carver. Fleishman’s writing in the first person ensures that the reader is always in Carver’s mind.” —New York Journal of Books on Last Dance 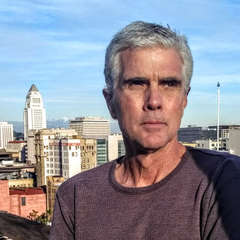