A Memoir of Memory & Migration

An Apple Best Book of the Month for August

In 2009, Rachael Cerrotti, a college student pursuing a career in photojournalism, asked her grandmother, Hana, if she could record her story. Rachael knew that her grandmother was a Holocaust survivor and the only one in her family alive at the end of the war. Rachael also knew that she survived because of the kindness of strangers. It wasn’t a secret. Hana spoke about her history publicly and regularly. But, Rachael wanted to document it as only a granddaughter could. So, that’s what they did: Hana talked and Rachael wrote.

Upon Hana’s passing in 2010, Rachael discovered an incredible archive of her life. There were preserved albums and hundreds of photographs dating back to the 1920s. There were letters waiting to be translated, journals, diaries, deportation and immigration papers as well as creative writings from various stages of Hana’s life.

Rachael digitized and organized it all, plucking it from the past and placing it into her present. Then, she began retracing her grandmother’s story, following her through Central Europe, Scandinavia, and across the United States. She tracked down the descendants of those who helped save her grandmother’s life during the war. Rachael went in pursuit of her grandmother’s memory to explore how the retelling of family stories becomes the history itself.

We Share the Same Sky weaves together the stories of these two young women—Hana as a refugee who remains one step ahead of the Nazis at every turn, and Rachael, whose insatiable curiosity to touch the past guides her into the lives of countless strangers, bringing her love and tragic loss. Throughout the course of her twenties, Hana’s history becomes a guidebook for Rachael in how to live a life empowered by grief.

“First in her mesmerizing podcast and now with this stunning book, Rachael Cerrotti has redefined the art of bearing witness. Balancing meticulous devotion to the inherited past with luminous attention to the unfolding present, We Share the Same Sky maps an astonishing journey of tenacity and transformation. Among myriad narratives in the post-Holocaust landscape, this work is a dazzling beacon.” —Elizabeth Rosner, author of Survivor Café: The Legacy of Trauma and the Labyrinth of Memory

“The Holocaust is soon to be two generations removed from direct experience, which makes it imperative for a new generation to pick up the burden of moral memory and carry it forward. Rachael Cerrotti’s powerfully felt—and deeply researched—account is a moving and compelling instance of this urgent effort. History’s pain—crushingly—becomes her own. But time, as she says, turns pain into responsibility—a transformation nobly enshrined in this book.” —James Carroll, author of The Truth at the Heart of the Lie

“Rachael Cerrotti’s We Share the Same Sky proves the Talmudic adage that to ‘save a life, is to save the world entire.’ The story chronicles Rachael’s impassioned and persistent search for the people and details of her beloved Jewish grandmother’s tale of escape, wandering, and survival and reveals to Rachael and to the reader, a world entire. It is a testament that the best stories are true stories and that not only is the personal political, but that history is personal.” —Roberta Grossman, documentary filmmaker

“A story in which the individual seizes her right to history and her faith by tirelessly shedding light on them and in the process making her family and the world whole.” —Julie Lindahl, author of The Pendulum: A Granddaughter’s Search for Her Family’s Forbidden Nazi Past

“A heartbreaking journey to retrace one’s family history, resulting in a universal story of profound inspiration…It is not only a personal revelation of immense and poetic magnitude, but also a clarion call to each of us to speak of man’s humanity to man.” —Mona Golabek, author of The Children of Willesden Lane

“Wow. Wow. Wow. Obviously ‘Wow. Wow. Wow’ does not make for a good book cover quote, but it’s just hard to find the words to express all of the emotion that I feel after reading this. In this incredible journey, we walk in step with Rachael and Hana. This story is a precious gift that teaches us how we all share a common thread.” —Nancy Spielberg, producer

“This is so much more than a book about the Holocaust. We Share the Same Sky takes us on an inspiring and heart-wrenching journey through time. Cerrotti is a magician. She masterfully interweaves threads of remembrance, sorrow, loss, and resilience, creating a beautiful tapestry of love and light.” —Ariana Neumann, author of When Time Stopped

“A memoir that is so visual in its writing that it comes as no surprise that the author is also a photographer. With every turn, I could envision where Hana and Rachael each traveled as they journeyed from country to country navigating love and loss.” —Michelle McLoughlin, photojournalist

“A lyrical, captivating, and essential read. Cerrotti turns her grandmother’s remarkable story of escaping the Holocaust into an epic story of love, loss, and redemption that reminds us that the past is never lost, it’s just waiting for us to reconnect. Cerrotti’s obsessive quest to follow her grandmother’s footsteps is both a tender portrait of a young woman’s fight to survive, and a personal meditation on how history can inspire us today.” —Jack Fairweather, author of The Volunteer

“At a time when memory of the Holocaust is endangered, We Share the Same Sky offers an important, heartbreaking, and hopeful bridge between the past and our present. The author, an honest and beautifully vulnerable guide, reconstructs her grandmother’s experience of displacement, survival, and defiant optimism. That survivor, Hana Dubová, described the Holocaust in her diary as ‘an incomprehensible black page of history.’ Through her retracing of her grandmother’s life, as well as her own story of loss and resilience, Rachael Cerrotti helps us decode that black page. In doing so she gives us two gifts: greater knowledge of the past, and a vivid example who can inspire us to choose life.” —Ariel Burger, author of Witness: Lessons from Elie Wiesel’s Classroom

“Readers should be grateful that Cerotti crossed those bridges and takes us along on this journey. She shows us how individuals can make big differences in the lives of others and how important it is to know our histories. Bearing witness has never been more important. Cerotti and her grandmother are powerful guides as to why these Holocaust stories matter.” —New York Journal of Books

“Cerrotti brings her podcast of the same name to the page with the gripping and deeply moving debut account of her late Jewish grandmother’s experience growing up in Nazi-occupied territory during WWII.” —Publishers Weekly (starred review)

“This is both a Holocaust story and a travelogue…Although their experiences as single travelers in Europe were some 70 years apart, Cerrotti had an abiding gift of empathy, especially for current-day young migrants from the Middle East, who like her grandmother, traveled to a European country where they knew no one, and were familiar with neither the language nor the local customs.” —San Diego Jewish World 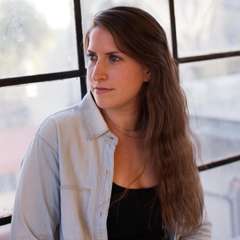 Rachael Cerrotti is an award-winning photographer, writer, educator, and audio producer. In 2019 she released her critically acclaimed podcast (also titled We Share the Same Sky) about her grandmother’s war story. The show was the first-ever narrative podcast based on a Holocaust survivor’s testimony and was listed as one of the best podcasts of the year by Huffington Post. Rachael’s work has been featured by outlets around the world, including NPR, PRI’s The World, WBUR, GBH, and in 2021 she became the inaugural Storyteller in Residence for USC Shoah Foundation. Rachael’s story is taught in classrooms worldwide and is a transmedia resource for educators interested in telling stories of past generations through a contemporary lens. Rachael is originally from Boston and is now based in Portland, Maine. Learn more at www.RachaelCerrotti.com and www.ShareTheSameSky.com.

Rachael Cerrotti is an award-winning photographer, writer, educator, and audio producer. In 2019 she released her critically acclaimed podcast (also titled We Share the Same Sky) about her grandmother’s war story. The show was the first-ever narrative podcast based on a Holocaust survivor’s testimony and was listed as one of the best podcasts of the year by Huffington Post. Rachael’s work has been featured by outlets around the world, including NPR, PRI’s The World, WBUR, GBH, and in 2021 she became the inaugural Storyteller in Residence for USC Shoah Foundation. Rachael’s story is taught in classrooms worldwide and is a transmedia resource for educators interested in telling stories of past generations through a contemporary lens. Rachael is originally from Boston and is now based in Portland, Maine. Learn more at www.RachaelCerrotti.com and www.ShareTheSameSky.com.