Escaping a traumatic childhood, Sasha finds peace, sanctuary, and purpose in a martial arts dojo whose sensei teaches her the ways of the samurai warrior. An accomplished black-belt fighter, she now happily dwells in the dojo, tucked away from the streets of Manhattan, until a midnight call sets her on a path into an underground world.

Struggling to pay off a gambling debt, her brother Danilo is severely injured in a no-rules club fight run by unscrupulous Russian Mafiosi. To settle the debt, Sasha volunteers to perform in one of these “dark fights,” vowing it’s for one time only. But her beauty, skill, and martial arts mastery bring her to the attention of powerful men who see her as a big meal ticket. Seducing her with money and drugs, they draw her into their sordid scheme until she becomes a big and glamorous draw, enriching herself while enriching her handlers and leaving behind a pulverized host of vanquished rivals. But she realizes how addictive the lure of brutality has become. As the stakes rise, she must become more and more violent to satisfy her handlers’ bloodlust.

Can she pull out before destroying someone? Can she pull out before destroying herself? Two fascinating men offer love and escape. But how true are their intentions? Genuine feelings and betrayal, violence and glamour, sex and martial arts all go hand in hand throughout the book. The Dark Fights introduces you to an unknown and frightening world and pins you to the mat until the very last page.﻿

“An enthralling and chilling world of martial arts—from the strict code of honor of a traditional dojo to the no-rules violence of the underground cage fighting. Alexandra Vinarov is an amazing writer and an expert on the topic. Every fight, every move, every emotion is genuine.” —Jimmy Pedro, two-time Olympic Medalist & World Judo Champion

“Daring, sexy, and laced with adrenaline, The Dark Fights packs a punch.” —Jill Criswell, author of Beasts of the Frozen Sun

“At the heart of this twisty, dark fighting cage, Vinarov shows what we do for love, for family, for survival, what sweat-glistened skin we’ll grab when the shining white gis have been stripped and our ideals with them. What desire and fear make of us. The Dark Fights is a Hunger Games for adults set in contemporary NYC that reveals how even the most dauntless of women too often have our strengths turned against us. And how we fight back. An enthralling and haunting read.” —Jennifer Givhan, author of Trinity Sight

“Considering the ‘world’ of The Dark Fights, one could anticipate the brutality and eroticism. But Alexandra Vinarov’s surprising degree of authenticity and depth elevates it above its genre. She reveals both the nobility of the mainstream martial arts culture and the depravity of its shadow faction with authority and attention to detail that only someone with intimate knowledge could. Her heroine’s journey is familiar, replete with basic human truths a reader recognizes. My heart broke and rejoiced with her every step of the way. I won’t soon forget this book.” —G. A. McKevett, author of the bestselling Savannah Reid Mystery Series

“I was hooked by the second paragraph! Alexandra Vinarov’s powerful narrative sucks you in and never lets go. Dark Fights is ultimately about the desperate ‘fight’ against darkness within our souls. A mesmerizing message of love and sacrifice leading to a tragic realm of violence, desperation, and loss. Ultimately, the message is one of hope, showing us that love can be triumphant against any challenge. And passion, repentance, redemption, and discipline will show the way home to a life of love and peace. A masterful book!” —Lt. Col. Dave Grossman, author of On Combat, On Killing and Assassination Generation

“Vinarov’s authentic view of this sinister subculture more than compensates for the familiar plotline. Readers will want to see more of the appealing Sasha.” —Publishers Weekly

“In The Dark Fights, Alexandra Vinarov has uncovered an unknown and frightening side of the New York martial arts world. A gripping and enormously entertaining novel about a young woman caught up in a lethal game—and a dangerous love affair. It mixes glamour and violence, is fascinating and sexy as hell, and held me at the edge of my seat.” —Greg Gutman, Judo World Champion, president of Hand-to-Hand Fighting USA Federation, vice president of USA Sambo Federation

“In this novel, Alexandra brilliantly juxtaposes the world of traditional martial arts and the underground cage fighting in NYC. The result is a fascinating, fast-paced, violent, and poignant read.” —Laszlo Huve, vice president, WKA (World Kickboxing and Karate Association)

“Alexandra Vinarov’s understanding of martial arts is superb. She is a wonderful writer and has created a fascinating story with authentic and gripping fight scenes, realistic characters, and a true-to-life depiction of New York.” —Mikhail Kozitskiy, founder, USA Sambo, 6th degree Black Belt in Judo, Master of Sport in Sambo

“The author made the book very exciting and intriguing, which made me want to keep reading more. I also liked how the author explains the fighting and martial arts in a way to make it easy to understand…I do recommend reading this compelling and powerful book.” —San Francisco Book Review 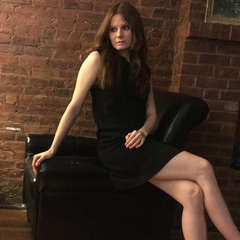 Alexandra Vinarov was born in Moscow but has lived in Manhattan long enough to boast all the rites of passage that make one a New Yorker. She started training and competing in judo as a young girl, experiencing firsthand the harsh Russian coaching methods that can be summed up as, “What doesn’t break you makes you stronger.” She also trained in Japanese jujutsu and aikido and holds a second-degree black belt in the latter. She continues practicing martial arts every day. She holds a PhD in literature, and her three favorite things are martial arts, books, and movies. When asked if she’s ever participated in a dark fight, she smiles enigmatically.

Lisa Zimmerman is an audiobook narrator known for her reading of The Manning Brides by #1 New York Times bestselling author Debbie Macomber.