What to believe. Who to betray. When to run.

Plastic surgeon Dr. Maria Martinez has Asperger’s. Convicted of killing a priest, she is alone in prison and has no memory of the murder. DNA evidence places Maria at the scene of the crime, yet she claims she’s innocent. Then she starts to remember …

As Maria gets closer to the truth, she is drawn into a web of international intrigue and must fight not only to clear her name but to remain alive.

With a protagonist as original as The Bridge’s Saga Norén, part one in the Project trilogy is as addictive as the Bourne novels.

“An engaging, exciting read from a writer who is always a step ahead of the reader’s expectations.” —David Mark, Sunday Times bestselling author

“Narrator January LaVoy adds to the intense atmosphere of this psychological thriller…LaVoy captures Maria’s growing anxiety at the disruption of her former routine and her forced confrontation of a murder she doesn’t recall. It’s obvious that Maria has Asperger’s syndrome, and LaVoy capitalizes on her behavior—her dispassionate recitation of facts, stilted interactions with other characters, and increasing apprehension. Overall, LaVoy’s depiction of Maria as a sympathetic and intriguing character heightens the tension of the conspiracy that is revealed through the story’s twists and turns. Winner of the AudioFile Earphones Award.” —AudioFile

“A simply riveting read from cover to cover with all manner of unexpected twists and turns. A deftly crafted, multilayered story by a truly gifted novelist with a flair for suspense driven narratives…very highly recommended.” —Midwest Book Review

“A great conspiracy thriller and a mind-bending tale!” —Booktime 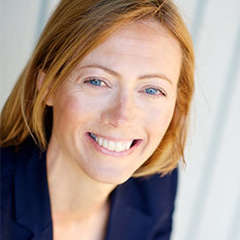 Nikki Owen is an award-winning writer and columnist. She was a marketing consultant and university teaching fellow before turning to writing full time. As part of her degree, she studied at the acclaimed University of Salamanca—the same city her protagonist in the Project trilogy, Dr. Maria Martinez, hails from. Nikki has written for the Gloucestershire Gazette, the Citizen and Echo newspapers, and Weekend magazine, and currently still teaches creative writing classes and chairs events at literary festivals. Originally from Dublin, she now lives in Gloucestershire with her family.