Someone is kidnapping Middle Eastern refugee children as they flee war-torn countries. Michael Patrick Finnigan and Katalin Fiero Dahar of St. Nicholas Salvage & Wrecking, a largely illegal bounty hunting operation, get the assignment to track them down and save the refugees. But when they discover that the perpetrators are a Serbian mobster and a battalion of the Kosovo military, the partners reach out to their “friends” to find justice.

Together, they created St. Nicholas Salvage & Wrecking, a largely illegal bounty hunting operation based in Cyprus and working throughout Europe. Operating under the radar for the presiding judge of the International Criminal Court, they track down the worst of the world’s worst.

Someone is kidnapping Middle Eastern refugee children as they flee war-torn countries and selling them into prostitution around the world. Finnigan and Fiero get the assignment to track them down and save the refugees. But when they discover that the perpetrators are a Serbian mobster—with patronage at the highest levels of the United Nations—and a battalion of the Kosovo military, the partners reach out to their “friends” to find justice, including a corrupt banker, a cadre of mercenaries, and a crew of professional thieves.

The battle to stop the mass kidnappings ranges from Belgrade and Zagreb, to the Loire Valley and Milan, and to the plains of Kosovo. As Finnigan and Fiero close in, the conspirators realize that the judge of the ICC is the real threat and plan an assassination. Now the partners have to save their patron and the kidnapped refugees from a rogue military force with nothing left to lose.

“St. Nicholas Salvage & Wrecking is a great read! Dana Haynes has crafted another exciting, well-written thriller with characters that leap off the page. Count me as a fan!” —Boyd Morrison, #1 New York Times bestselling author of The Ark and Rogue Wave

“Finnigan and Fiero make a smashing debut in Haynes’s new series. A breathless ride that will keep you turning pages all night. Watch out, there’s a new wrecking crew in town!” —Brett Battles, USA Today bestselling author of the Jonathan Quinn series

“Cop Finnigan and soldier Fiero are an irresistible duo as they cajole, connive, and yes, kill, their way to bringing in the bad guys.” —The Oregonian

“In St. Nicholas Salvage & Wrecking, the action is fierce, the characters compelling, the story chillingly plausible. Dana Haynes knows how to write an irresistible high-voltage thriller.” —Meg Gardiner, Edgar Award–winning author of Unsub and Into the Black Nowhere

“This clever, fast-paced thriller from Haynes introduces a decidedly odd crime-fighting couple—Michael Finnigan, a tough former US marshal, and Katalin Fiero Dahar, a lethal ex-spy, who operate an illegal international bounty hunting enterprise based in Cyprus…Haynes effectively interweaves the unusual working relationship between his cop and spook with copious descriptions of military hardware and ops details. Distinctive supporting characters include crooked police, well-connected baddies, and a spunky young reporter who infiltrates a refugee caravan. Readers will look forward to the further adventures of Finnigan and Fiero.” —Publishers Weekly (starred review) 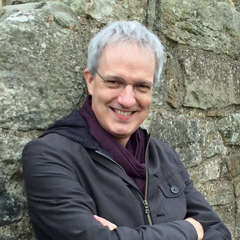 Dana Haynes is the author of nine mystery and thriller novels, including St. Nicholas Salvage & Wrecking, the first of the Finnigan and Fiero mysteries for Blackstone Publishing. He is an award-winning newspaper journalist, currently the managing editor of the Portland Tribune. He formerly served as communications director and speechwriter for the mayor of Portland, Oregon. He lives in Portland with his wife, Katy King, a government relations consultant.

Victor Bevine, Earphones Award–winning narrator, has worked for over thirty years as an actor, screenwriter, narrator, director, and more. A graduate of Yale University, his acting credits include many prestigious roles onstage as well as roles in the film version of A Separate Peace and countless television shows. He has written several screenplays, including Certainty, which was chosen for two prestigious writers’ conferences and which served as the basis for his first novel. His thirty-minute short film Desert Cross, which he wrote and directed, won accolades at the Athens International Film Festival. He serves as CEO of the World Freerunning Parkour Federation, of which he is cofounder.