Sami is no revolutionary. When the Arab Spring breaks out in 2011, he’s busy finishing school in Cairo and hiding his relationship with an American woman from his conservative mother, Suad. It’s a task that’s becoming impossible as events take a catastrophic turn.

But Suad won’t be fooled—her son has been distant and she knows it’s not about politics. Far away in the Nile Delta, she spends her days tending obsessively to her lemon grove, which is quickly becoming her last vestige of control. The only child who remains by her side is her daughter, but as she, too, gets involved with the protests, Suad realizes it won’t last for long.

There’s one person who knows exactly what’s going on in the family, and she wishes she didn’t. The maid, Jamila, already has too much to worry about as a refugee who’s lobbying for resettlement, expecting a baby, and looking for her missing husband. All she wants is stability, and that her dreams won’t be thwarted by the unrest sweeping a city she doesn’t belong to—a city that doesn’t even want her there.

As the country revolts against the regime it has always known, Jamila, Sami, and Suad find themselves caught in the whirlwind as they examine their own life choices and, in some cases, deal with the inevitable heartbreak that follows when revolution is not always what it seems.

“Leila Rafei’s Spring is the all too timely tale of a world come rapidly and irreversibly undone. Set against the tumultuous backdrop of the Arab Spring, Rafei’s elegant and unsparing debut novel of family and revolution is as essential as it is breathtaking.” —Hannah Lillith Assadi, author of Sonora

“Leila Rafei is a wondrous storyteller and a master of world-building. Her novel Spring tells the captivating tale of a family caught in the midst of a revolution that will profoundly change their relationship both to their country and to each other. I was immediately drawn to the novel much in the same way each character is enchanted by the Nile River, which winds through their lives and offers a hopeful glance into their losses, heartaches, and dreams. From the traveling American who demonstrates on Cairo’s streets to the doting mother whose lemon grove thrives even as she is pained to witness her government fall, Rafei’s gorgeous book is at once transporting and recognizable, both shocking and meditative, and replete with insight into how our dreams for our own lives are often mirrored in our dreams for the places we love.” —Stephanie Jimenez, author of They Could Have Named Her Anything

“Closely observed, Spring follows the overlapping lives of people living in Cairo in very different ways during the January 25 Revolution. It captures the uncertainty of that singular period in which the world seemed to change completely while life simultaneously went on in much the same mundane ways. The drama and melodrama of everyday life in Cairo in the midst of the disruption is captured in the lives of Jamila, Ali, Rose, and Suad, who see and negotiate the meaning of the social upheaval in radically different ways. Above all, Spring captures the way in which everyone living in Cairo, regardless of their nationality, suddenly found themselves in a new world (that nonetheless looked a lot like the old one).” —Amy Motlagh, author of Burying the Beloved

“Rafei dramatizes the Egyptian Revolution of 2011 in her vivid debut…Throughout, Rafei provides authentic details of local cuisine, vintage pop music, clothing, and the roar of the crowd…Readers will hope to see more from this talented author.” —Publishers Weekly

“Each of these three characters grapple with ghosts from their pasts and their uncertain futures in this engrossing debut.” —BuzzFeed

“Spring by Leila Rafei adeptly casts the Arab Spring uprising as a backdrop for upheaval in the lives of three ordinary people in her extraordinary debut novel…By allowing the arc of ordinary lives importance over an act of revolution, Rafei elevates her characters and gives their intentions a sense of gravity. Spring is an impressive debut novel that combines the urgency of literary fiction with the timelessness of historical fiction.” —Shelf Awareness

“Throughout the book, Rafei’s ability to take us through the complex politics of Egypt’s revolutionary period is remarkable. She’s able to shed light on political and social dynamics, from the wealthy clients whose homes Jamila cleans to her poorest neighbors, from the Mubarak supporters to the revolutionaries.” —DCTRENDING

“Throughout the book, Rafei’s ability to take us through the complex politics of Egypt’s revolutionary period is remarkable. She’s able to shed light on political and social dynamics, from the wealthy clients whose homes Jamila cleans to her poorest neighbors, from the Mubarak supporters to the revolutionaries.” —DCTRENDING

“A stunning work that exemplifies the kind of stories we need to read and write about in the Arab world.” —The New Arab 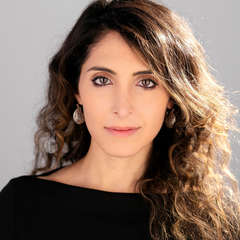 Leila Rafei grew up in the Washington, DC area and lives in New York. Spring is her first novel.

Negin Farsad is a comedian, actress, writer, and filmmaker. She has directed numerous documentaries, including The Muslims Are Coming, Nerdcore Rising, and A Cricket in the Court of Akbar. She also produced, directed, and performed in the Comedy Central series, The Watch List, the first show in the history of television to feature Middle-Eastern American comedians tackling international political issues. She lives in New York City.