Eve Mann arrives in Ideal, Georgia, in 1972 looking for answers about the mother who died giving her life. A mother named Mercy. A mother who for all of Eve’s twenty-two years has been a mystery and a quest. Eve’s search for her mother, and the father she never knew, is a mission to discover her identity, her name, her people, and her home.

Eve’s questions and longing launch a multigenerational story that sprawls back to the turn of the twentieth century, settles into the soil of the South, the blood and souls of Black folk making love and life and fleeing in a Great Migration into the savage embrace of the North.

Eve is a young woman coming of age in Chicago against the backdrop of the twin fires and fury of the civil rights and Black Power movements—a time when everything and everyone, it seems, longs to be made anew.

At the core of this story are the various meanings of love—how we love and, most of all, whom we love. everyman is peopled by rebellious Black women straining against the yoke of convention and designated identities, explorers announcing their determination to be and to be free. There is Nelle, Eve’s best friend and heart, who claims her right both to love women and to always love Eve as a sister and friend.

Brother Lee Roy, professor and mentor, gives Eve the tools for her genealogical search while turning away from his own bitter harvest of family secrets. Mama Ann, the aunt who has raised Eve and knows everything about Mercy, offers Eve a silence that she defines as protection and care. But it is James and Geneva, two strangers whom Eve meets in Ideal, who plumb the depths of their own hurt and reconciliations to finally give Eve the gift of her past, a reimagined present, and finally, her name.

“History owns every page of this beautifully intimate novel, residing as willfully as the fictional world Conner creates. With writing that is both smart and unapologetically edifying, Conner depicts a human experience with totality that is strikingly small, made so by the binds that tie us in our infinite search for understanding. A powerful read.” —Edward A. Farmer, author of Pale: A Novel

“M Shelly Conner has a literary masterpiece in everyman. The unflinching dialogue and masterfully crisp prose gripped me from the beginning. Conner’s command of history and language is on full display! everyman is a story for everyone. This book shows you the knowledge of your past can break your heart, set you free or very likely both.” —Catherine Adel West, author of SheReads 2020 Book of the Year, Saving Ruby King

“everyman is a vivid and winding tale of self-discovery that I was quite happy to trail along after. With a cast of fascinating characters, each one lovingly drawn, Conner’s debut is captivating, smart, and beautifully written.” —Sharon Lynn Fisher, award-winning author of The Absinthe Earl

“everyman is utterly compelling. It’s a deep exploration into who we are in the fabric of our souls and the deep and complex power of womanhood; what makes us, what we need to know about who we are, and when we can and should just accept with love and without condition, not only those closest to us, but ourselves.” —Natasha Boyd, author of The Indigo Girl

“M Shelly Conner’s everyman unwinds a history that is by turns literary and intimate. That indelible past is written in the lives Conner brings to life in these pages. A generational saga recalling books like Isabelle Allende’s House of Spirits, everyman follows one woman’s journey to find where she comes from and how distant, unseen roots shape us.” —David R. Slayton, author of the Adam Binder novels

“everyman by M Shelly Conner is a mural, a bold and colorful exploration of personal and communal history. At its core, the work is a bountiful examination of Black life before and after the Great Migration, deeply researched and carefully rendered, the narratives inform and intersect, challenge and comfort; fueled by intellectual inquiry and steeped in history, this book is personal and political, an unapologetic engagement of the heart and the mind. With this novel, Conner invites us to explore the stories we tell ourselves about who we are, where we came from, and how we define home.” —Sheree L. Greer, author of A Return to Arms

“everyman is the rare twenty-first-century novel that feels like Morrison and Walker guided the hand of the characters, and the writer, calling it home. M Shelly Conner writes as if all of our lives depend on her art. After reading everyman, I’m convinced she’s right.” —Kiese Laymon, author of Heavy: An American Memoir

“History comes alive through M Shelly Conner’s richly imagined settings and characters. I was hooked by the complex web of secrets that unfold in unexpected ways.” —Maisy Card, author of These Ghosts Are Family

“A literary masterpiece…The unflinching dialogue and masterfully crisp prose gripped me from the beginning…everyman is a story for everyone.” —Catherine Adel West, author of Saving Ruby King, SheReads 2020 Book of the Year

“everyman is the rare twenty-first-century novel that feels like Morrison and Walker guided the hand of the characters, and the writer, calling it home.” —Kiese Laymon, author of Heavy: An American Memoir

“Conner’s inviting debut unearths a young Black woman’s family history…Conner weaves plenty of details of African American history throughout, such as the founding of the Tuskegee Institute and Martin Luther King Jr.’s alliance with a Chicago street gang, seamlessly connecting these events to the characters’ lives. Overall, this wonderfully evokes a sense of place, and a palpable curiosity about the past.” —Publishers Weekly

“In this lilting and lyrical epic, readers follow the meandering ancestry of twenty-two-year-old Every Mann, known as Eve, as she searches for answers and meaning in her genealogy…everyman is a gorgeous, multigenerational examination of the Great Migration and the ripple effects of mysteries that were left in its wake for the descendants of those who sought ‘the warmth of other suns.’” —Booklist

“Boomers, Gen Jones, Millennials, Gen X, Gen Y, and beyond have much to learn from Dr. Conner, and the stories are telling and compelling as each character’s thread creates the tapestry that Eve is seeking to create. She weaves words, actions, recollections, and even though a picture is forming, it will always be gloriously incomplete. Summer, fall, winter—any season is perfect for this book. Get two today—one to keep and one to share. The loaner will never return.” —Out in Jersey

“Janina Edwards sensitively narrates Conner’s powerful debut…Edwards’s voice is perfectly suited to this beautiful audiobook. She speaks with a velvety fluidity…[and] is especially effective at delivering dialogue, as she captures the many different personalities and authentically communicates their love, desperation, and humanity.” —AudioFile 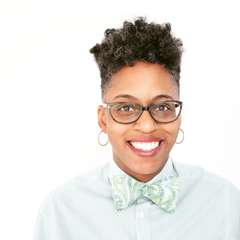 M Shelly Conner, a Chicago native, spent her summers bouncing between her grandmother in Memphis and relatives in Los Angeles, reveling in the sprawl of the Great Migration. She received her PhD from the University of Illinois at Chicago. A multigenre writer, she is the creator of the Quare Life web series and has published essays on dapperqueer aesthetics, black womanhood, self-sustainable living, and their intersections in various publications, including the A.V. Club, TheGrio, Playboy, and The Crisis. An excerpt of everyman appears in the Obsidian Journal of Literature & Arts in the African Diaspora. Conner is assistant professor of creative writing at the University of Central Arkansas and lives in Arkansas with her wife and their dog, Whiskey.

Janina Edwards, an Earphones Award–winning narrator, is a native of Chicago and a graduate of New York University’s Tisch School of the Arts acting program. Her 2016 performance of Voice of Freedom was a finalist for the Audie Award.