Death Waits in the Dark

A 2020 Reading the West Book Award nominee for Adult Fiction

It took all of thirty seconds for two shots to bring the world of Margaret Tabaaha crashing down around her. After losing her husband in Afghanistan during the first year of Operation Enduring Freedom, her two sons were all she had left. Now they had been taken from her violently, deliberately, plunging her into a whiskey bottle and stripping away her reason for living.

When Arthur Nakai receives a call from his first love, Margaret, her voice pleading for his help, it comes as he is attending a wake for one of the men he considered a brother from his days in the Marines 6th LAR Wolf Pack Battalion. Feeling a deep and responsible obligation to help her, Arthur soon finds himself involved in the multi-billion-dollar world of the oil and gas industry and coming face-to-face with an old adversary, Elias Dayton. Their paths had crossed when Arthur was a member of the Shadow Wolves, an elite tactical unit within US Customs and Border Protection. Now Dayton runs Patriot Security, a Blackwater-type firm that keeps the oil rigs, gas wells, and man camps secure from the Water Protectors, protesters pushing to stop the fracking and poisoning of Native lands.

As Arthur works through the case from his end, Navajo police chief Jake Bilagody tackles it from another angle, looking into the strained relationship between the oil company and the Navajo people, all while searching for a missing Navajo man that may have become an unwilling piece on the reservation checkerboard. But when Arthur learns the identity of the boys’ killer, he struggles to make sense of it. Because if the clues are right, he will be forced to make a decision that will haunt him for the rest of his life.

“With Death Waits in the Dark, Mark Edward Langley offers readers an utterly compelling portrait of human beings struggling to deal with the aftermath of great trauma. Langley writes about the great Southwest with a loving eye for detail that fans of Tony and Anne Hillerman will readily embrace. I was utterly captured by this fine second novel in the Arthur Nakai series. Along with those who are already fans, I can only hope that there will be many more stories to come. I recommend this book with a full heart.” —William Kent Krueger, New York Times bestselling author

“Death Waits in the Dark tells a gritty story of betrayal, deceit, and danger through the eyes of Navajo protagonist Arthur Nakai. The tightly written noir plot moves from scene to scene like a thriller, building suspense in every page.” —Anne Hillerman, New York Times bestselling author

“The action builds to a bittersweet ending. Descriptions of the starkly beautiful New Mexico landscape contrast with the poignant picture of the state’s poor and alcohol-stricken native peoples. Tony Hillerman fans may want to check this one out.” —Publishers Weekly

“The characters are well-rounded and intriguing, and there are plenty of red herrings to keep the mystery under wraps until the very end.” —Seattle Book Review

“A carefully crafted police procedural–style mystery that provides the reader with an entertainingly original and inherently riveting read from cover to cover…Very highly and unreservedly recommended.” —Midwest Book Review 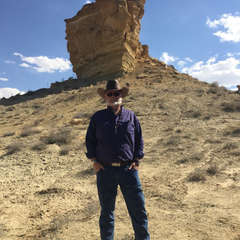 Mark Edward Langley was instilled with a love for the American West at a young age by his father. After revisiting it throughout adulthood, his connection to the land and its people became irrevocable. After spending almost thirty years working in the corporate world, he retired at the end of 2016 and began to focus on realizing his goal of becoming an author. His first novel, Path of the Dead, was released in August of 2018. Mark and his wife, Barbara, live in Indiana and split their time between there and the American Southwest. He is currently working on the next novel in the Arthur Nakai series.