An Audible Pick of Most Anticipated Listens for Spring

A page-turning whodunit set in the wilds of a remote movie ranch, Bottom Feeders describes the hapless Hollywood cast and crew that eke out a living working on low-budget fare.

Their ambitious TV movie needs to be made fast and cheap, but a brutal murder grinds production to a halt. An approaching forest fire forces everyone to evacuate. In the confusion not everyone gets out. Eddie is the alcoholic director, Sheila the vulnerable camera assistant, Tom the self-centered actor, and Sondra the spurned sheriff’s deputy. Who will survive?

Death comes sudden and silent. The camouflaged killer’s weapon-of-choice is a high-tech hunting bow capable of firing razor-sharp arrows four hundred feet per second. The mysterious assassin has an agenda. Those left behind must find out what it is and who is behind this bloody slaughter in the fight for their lives.

“A thrill-ride. Blood, sweat, and fears among Hollywood’s low-budget ne’er-do-wells. This is the real deal.” —Fred Olen Ray, director of over 150 titles, including Hollywood Chainsaw Hookers

“From years of experience fighting in the trenches of low-budget films, Shepphird has crafted a pulse-pounding thriller of page-turning fun.” —Andrew W. Marlowe, creator and executive producer of ABC’s Castle

“A fast-paced, fun read that explores a part of the movie business that often gets overlooked…The pages move quickly, the story adheres to a classic whodunit formula, and from ‘Action!’ to ‘Cut!’ it’s a pleasure to read.” —Mystery Scene

“The low-budget project is scheduled to film in San Bernardino County on a tight schedule, but the pressures of making the deadline are forgotten after members of the cast and crew become the targets of a murderous archer, leaving Eddie and Sheila scrambling to survive.” —Publishers Weekly

“Instead of attempting to link the drastically different halves of this tale, Shepphird seems to revel in the contrast between them. Like-minded readers will get two stories for the price of one.” —Kirkus Reviews

“The plot construction is straightforward, effective, and the stuff of classic mystery…[which] captures the vanities, pretensions, rivalries, and insecurities of all the film’s participants…The author handles the thriller part with dexterity. He keeps the tension high and the narrative moving…It’s an entertaining mystery, but it also provides a sharp look at what it’s like to toil for a living in the low-budget movie trenches.” —Criminal Element

“This audiobook is great entertainment from start to finish, and narrator Bronson Pinchot relishes every minute of it…Great fun ensues, as well as an opportunity for Pinchot to gently poke fun at Hollywood types. This audiobook will certainly provide a welcome distraction for anyone in need of an action fix.” —AudioFile

“A crackling good yarn about the inner workings and intrigues behind the scenes of a Hollywood low-budget movie…Shepphird knows the terrain and gives the reader a deliciously voyeuristic view of the Hollywood dream factory at work. A great read!” —Clive Rosengren, author of Red Desert 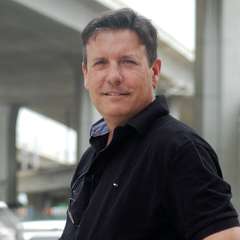 John Shepphird is a Shamus Award–winning author and writer/director of TV movies.