SoCal surfer Dolphin Smoote just wanted to earn quick dough for a date with the brown-eyed beauty … what he got was G-men (and G-women), ghosts, and a Colt 45.

John Jacobson’s California Fever is the compelling fusion of mystery, crime, and Southern California beach charm. Top surfer Dolphin Smoote gets more than he bargains for when he works up the nerve to ask out the brown-eyed beauty on a date. The search of quick coin without having to work will always lead a surfer to precarious places, and Dolphin is no exception. With the help of his lovable surfer crew who often have more to say about stylishness than anything else, Dolphin finds himself between conmen, ghosts, an impending storm from the coast of Mexico … and still no money for a second date. Along the ride, Dolphin finds in himself capacity for storytelling that would make P. G. Wodehouse himself chortle with laughter.

From the author of All the Cowboys Ain’t Gone comes this thrilling tale where a crime-novel writer becomes caught up in crimes, and an aspiring writer tries to outrun the crime in her bloodline—what could go wrong? Jacobson immerses the reader in the world of California’s casual-radical surf culture, where radical stunts executed with the most casual air is a practiced form of art. In this world, rival surf clans goad each other on, upping the ante on stunts until mayhem looms. It looks like the storm brewing off the coast of Southern California just might disturb the tranquility of the beach.

“Channeling the idiosyncratically whimsical voice of Tom Robbins and marrying it with the SoCal surf scene, John J. Jacobson ‘s California Fever is a perfectly formed overhead Rincon barrel groomed by an offshore zephyr. Alternately funny, wacky, and mordantly satiric, Jacobson’s charming follow-up to his critically acclaimed All the Cowboys Ain’t Gone goofy-foots its way into a mischievously madcap plot headlined by a guileless main character—thigh-deep in a miasmic subculture of sun-worshipping surfer clapperheads—hell-bent on personal salvation and the love of a woman, but unwittingly vectored for self-destruction. Evoking fond memories of the inscrutably plotted The Big Lebowski, I devoured this coruscating gem in one night in a veritable blur of pages. Move aside, Kem Nunn. Or, as the surfing world’s GOAT Kelly Slater might holler, ‘Cowabunga!’” —Rex Pickett, author of Sideways and The Archivist

“Having lived in the place and through the era, Jacobson captures them both vividly and humorously. It was a time when surfers really did rule; a time when surfers would avoid almost anything (like a steady job) rather than risk missing a day of good waves in the sun. This book also gives a taste of the adventures and misadventures that epitomized the ‘casually radical’ surf culture. Those days of relative innocence are pretty much gone, but it is a blast to go back.” —Rowland Hanson, former Microsoft vice president of marketing, and still a “surfdog”

“John J. Jacobson proves his writing skills…California Fever is a humorous mystery with a solid plot and a feel-good ending. A quick, entertaining read that is suitable for young teens and adults.” —Book Junkie Reviews 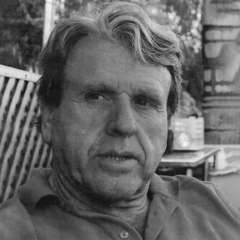 John J. Jacobson grew up surfing the waves in Southern California, Mexico, and Hawaii. After dropping out of college, for a number of years he (as he likes to say, quoting Shakespeare) was blown by “such wind as scatters young men through the world to seek their fortunes farther than at home, where small experience grows.” Eventually, he somewhat settled down and received, among other degrees, an MA in Renaissance literature and an MBA from Claremont Graduate School. Before becoming a full-time writer, he did have a real job in microchip design software. He is also the author of All the Cowboys Ain’t Gone.

Grover Gardner (a.k.a. Tom Parker) is an award-winning narrator with over a thousand titles to his credit. Named one of the “Best Voices of the Century” and a Golden Voice by AudioFile magazine, he has won three prestigious Audie Awards, was chosen Narrator of the Year for 2005 by Publishers Weekly, and has earned more than thirty Earphones Awards.