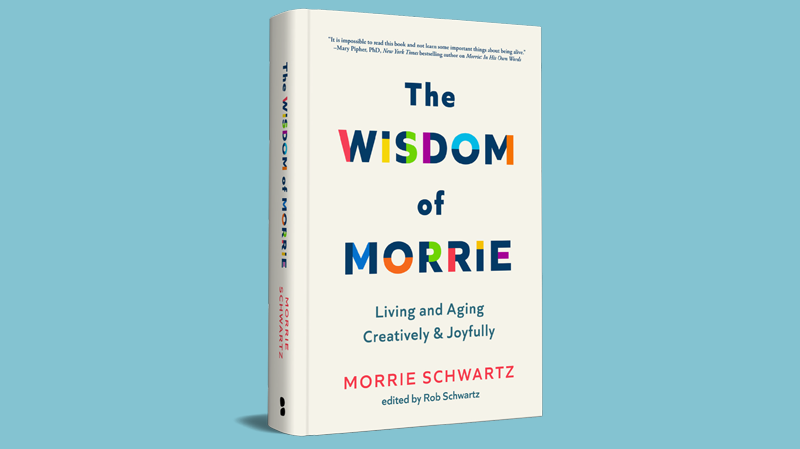 “A beautiful book that shows that every moment of existence is
precious and adversity is part of our life’s journey. Those lucky enough
to read this book will be inspired to higher consciousness in the midst of
aging, infirmity, and the final chapters of life.”—DEEPAK CHOPRA

A powerful posthumous masterpiece by Morrie Schwartz, the beloved subject of the classic, multimillion-copy number
one bestseller Tuesdays with Morrie, has been acquired by Blackstone Publishing.
Morrie Schwartz’s son, Rob Schwartz, rediscovered his father’s unpublished
manuscript written to help us experience aging as a positive, creative, and
connected experience. Rob Schwartz is the editor of the book, which will be titled
The Wisdom of Morrie: Living and Aging Creatively and Joyfully and will release
as a major lead title from Blackstone in April 2023. The deal was negotiated by
Rick Bleiweiss, Head of New Business Development at Blackstone Publishing,
with Mel Berger of William Morris Endeavor representing Rob Schwartz.

With the 25th anniversary celebration of Tuesdays with Morrie and a new edition
of the classic work releasing this year, Morrie Schwartz is back in the spotlight
and readers will be eager to hear more of his powerful advice and insights.
Who am I really? What have I done? What is important and meaningful to
me? What difference does it make that I have lived? What does it mean to be
truly human, and where am I on that scale? In The Wisdom of Morrie, Morrie
Schwartz explores these questions and many more in this profound, poetic, and
poignant masterpiece of living and aging joyfully and creatively. Later life can
be filled with many challenges, but it can also be one of the most beautiful and
rewarding passages in anyone’s lifetime. Morrie draws on his experiences as a
social psychologist, teacher, father, friend, and sage to offer us a road map to
navigate our futures.

The Wisdom of Morrie is filled with empathic insights, stories, anecdotes, and
advice, told in Morrie’s reassuring, calm, and timeless voice. The Wisdom of
Morrie is a guide to exploring deep questions of how to live and how to love.

Rick Bleiweiss states, “Blackstone is thrilled to be the publisher of THE WISDOM
OF MORRIE, an important book that will inspire readers of all ages. Morrie
shows us how to view the aging process in a meaningful and fresh way that
will resonate with anyone who wants to lead a more joyful and fulfilling life.”

Rob Schwartz comments, “My father would be overjoyed that the manuscript he
worked so hard to craft is finally being published. I spoke with him at length about the
project while he was writing it and he considered this work the culmination of his insights
into the human condition. Dad told me he drew from the most valuable aspects of his
academic, therapeutic, and personal knowledge when creating this book.”

About the Author
MORRIE SCHWARTZ became an internationally renowned figure posthumously
after Mitch Albom’s Tuesdays with Morrie stayed number one on the New York Times
nonfiction bestseller list for five years. Before that he was a beloved professor of
sociology at Brandeis University and cherished therapist at Greenhouse in Cambridge,
Massachusetts. Morrie wrote on a wide variety of topics. He dedicated his life to
helping people understand their relationships to society, other people, and themselves.
His groundbreaking 1954 book (with Alfred Stanton) The Mental Hospital made him
a superstar in the field of sociology, earning Morrie a full professorship as his first
university position. Morrie was dedicated to social justice and valuing every human
being.

About the Editor
ROB SCHWARTZ is a journalist, editor, producer, and entrepreneur. His work has
appeared in Time, Newsweek, Variety, the Hollywood Reporter, and Melody Maker,
among others. He was a script editor at NHK World TV for fourteen years and has been
an Asia Correspondent for Billboard magazine since 2008. In 2002 he was appointed
executive director at Play Label, a Tokyo-based dance imprint. In 2005 he founded
Dynastic Records in Japan. Rob produces feature films, including Putty Hill (2010) and
Bernard and Huey (2017). Rob actively invests in tech-based starts-ups and is currently
a partner in the virtual concert-creation platform Moshpit (www.moshpit.live).

About Blackstone Publishing
Founded in 1987, Blackstone Publishing is an independent, privately owned company
headquartered in Ashland, Oregon. Offering a growing catalog of over 17,000 titles
in print, e-book, and audiobook formats, the authors we publish are as varied as the
books themselves, including works by Gabriel García Márquez, Ayn Rand, Ian Fleming,
Neil deGrasse Tyson, Karen Slaughter, and many more. Blackstone is home to a vibrant
and eclectic community of storytellers and story lovers, providing superior content and
offering hundreds of new titles each month.

Add to Wishlist
The Wisdom of Morrie