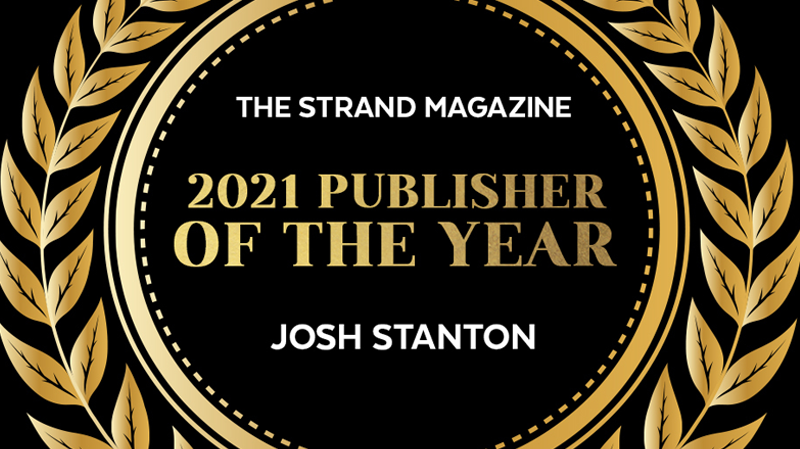 Josh Stanton of Blackstone Publishing received the Publisher of the Year Award. Stanton took the helm at Blackstone ten years ago, and during his tenure sales have more than tripled. He has also overseen the evolution of Blackstone not only as one of the largest audiobook publishers in the United States, but also as a publisher of bestselling print and digital books, recently releasing highly successful mystery novels by Meg Gardiner, Brian Freeman, Catherine Ryan Howard, and Sara Foster.

“Josh Stanton and the Blackstone team are legendary in this very tough and competitive business,” said Managing Editor Andrew Gulli. “A universal refrain you hear from all of their writers is how dedicated, professional, and creative the Blackstone team is. As a reader and an editor, when I open an envelope from Blackstone Publishing, I know something good is in store.”

“I want to start by thanking everyone who gave me the nod this year. This award comes as a great surprise, but I’m grateful to receive it. First, I’d like to thank all the amazing authors who trusted and believed in us as a publisher, without that we certainly wouldn’t be here today. Also, all the amazing narrators we are so fortunate to have worked with,” said Stanton. “Also our Blackstone staff; they should know honestly that this is their award. I feel blessed to be surrounded with such a talented group good people. And of course our founders Craig and Michelle Black, I want to thank them for building such an amazing company.”

The Critics Awards were judged by a select group of book critics from NPR, USA Today, The Wall Street Journal, The Minneapolis Star Tribune, and The Washington Post.