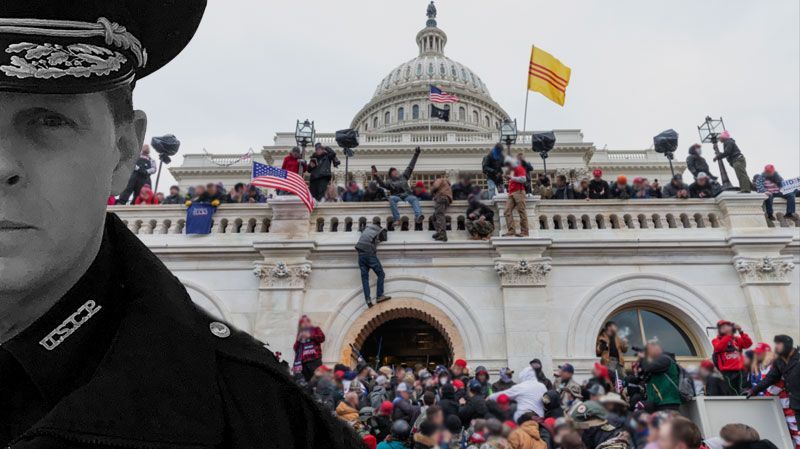 UNDER SIEGE AND OUTNUMBERED  58 TO 1 ON JANUARY 6

BUT NOTHING COULD HAVE PREPARED HIM FOR JANUARY 6

Ashland, Oregon (September 26, 2022) – An explosive new book by Steven A. Sund, Chief of the U.S. Capitol Police during the January 6 attack on the U.S. Capitol, will be published by Blackstone Publishing on January 3, 2023: COURAGE UNDER FIRE: UNDER SIEGE AND OUTNUMBERED 58 TO 1 ON JANUARY 6.

Courage Under Fire is former United States Capitol Police Chief Steven A. Sund’s gripping personal account that takes readers inside the events leading up to January 6, and provides a detailed and harrowing minute-by-minute account of the attack on the US Capitol, which was valiantly defended in hand-to-hand combat by the US Capitol Police officers who found themselves outnumbered 58 to 1.

Courage Under Fire contains never-before-seen photographs and draws upon audio recordings, key documents, and government records as it traces Sund’s extraordinary journey from his command post on January 6 to his explosive behind-closed-doors testimony before the January 6 committee.

"It's almost two years after January 6 and the American people still don’t know the truth. It's time to break my silence and reveal everything that I know happened," said Sund.

"Chief Sund has written a book that details the road to January 6, including never before revealed information, a harrowing account of the attack itself which reads like Black Hawk Down at the U.S. Capitol, and the cover-up that followed. The book contains shocking new information that the American public needs to know," said Josh Stanton, CEO of Blackstone Publishing.

Steven A. Sund, one of only ten men in history to hold the title of Chief of the US Capitol Police, has coordinated dozens of National Special Security Events, responded to numerous critical incidents and active shooter events, and has protected every living US president. But nothing could have prepared him for the violent attack on the US Capitol on January 6, 2021.

Three days before the attack, Chief Sund requested the assistance of the National Guard. This request was denied. In preparation for the Joint Session of Congress, Chief Sund directed every available sworn officer to be on duty to protect the Capitol and all of its members and staff.

But it wasn’t enough.

The savage attack that followed was a well-planned and carefully coordinated armed assault on the United States Capitol, involving thousands. The shock and horror of this attack exploded on TV screens worldwide as US Capitol Police officers under Chief Sund’s command found themselves facing a violent siege, hit with pipes, fire extinguishers, boards, and flag poles. Dedicated men and women were knocked unconscious and sprayed with mace and bear spray as live pipe bombs were discovered at the national headquarters of both major political parties.

Finally, multiple police lines were breached. Then the building was breached. The National Guard didn’t arrive until it was much too late. In the end, 150 officers were seriously injured, and nine Americans were dead.

Now, for the first time, Chief Steven Sund has written the definitive inside story of the perfect storm of events that led up to the attack on the US Capitol on January 6, a day that rocked the nation and threatened our democracy. As the Capitol descended into chaos, insurrectionists infiltrated and stormed its hallowed halls and democracy was pushed to the brink. Few people realize just how close we came to seeing the Vice President, the Speaker of the House, and countless members of Congress beaten, maimed, or killed.

Other explosive revelations in Courage Under Fire include:

There have been many false reports and outright lies concerning the conduct of the US Capitol Police on January 6, and there has been no accountability for the individuals who bear most of the responsibility for the failures that left the USCP unprepared that day—from the shocking failures in intelligence to the outright stonewalling Chief Sund received from the Pentagon when he repeatedly called for the National Guard’s help, even as the attack on the Capitol was raging.

Forced to take the fall and resign, this is Chief Sund’s chance to answer those questions and to tell the full truth about what really happened on January 6.