Beyond the Horizon by Eoin Lane

She points the lens of the camera. The artist turns his head slightly. The light catches his brow and his silver-white hair. She snaps. He is lit like a Vermeer.

Ireland. County Wexford, 1951. A father and son go swimming in the sea. The waves crash. The wind rises. Only one comes back—Colin, aged six. His mother, Eileen, runs to seek help, but this is a tragedy that will haunt them forever. Colin won’t speak a word. He is mute and struggling to cope. But Eileen can see he has a talent for painting. She shows him his father’s artwork and gives him a print of a Paul Henry landscape, and slowly, with her encouragement, he begins to follow his dream.

Years later on Inishbofin island off the west coast of Ireland, out walking with his dog on the sand, Colin meets Laura, a young woman on holiday, and a tentative friendship starts to develop. Gradually his past comes to life in a story filled with love and frustration, loss and betrayal, but above all with the passion he has held through his life for the light in the sea and the sky and his search for that distant shore where the sky sweeps down to the water.

One man. The sea. One painting.

“A haunting and heartfelt novel, Beyond the Horizon is an utterly transporting tale of love, loss, and artistic passion. Eoin Lane’s debut heralds the arrival of a striking new talent.” —Dan Sheehan, author of Restless Souls

“I was transported rapidly into the world of Colin Larkin to embark on a journey of tragedy, creativity, love, and loss in an emotion-filled story. Lane has a gift for poetic visual storytelling that reels you in and helps you combine images with text to heighten the experience and ultimately connect the reader to all the themes and threads throughout.” —Elsie Nolan, artist

“A stunning read! Moving. Couldn’t put it down. The author being a painter as well as a writer makes for a real tour de force.” —Dr. Noelle Campbell-Sharp, founder of Cill Rialaig, artist and writers retreat

“Trials and tragedies can spur artists to great heights, but they can also undermine everything they’ve worked for. Such is the weighty conundrum behind Eoin Lane’s Beyond the Horizon, about six decades of an artist’s life on the breathtakingly beautiful shores of Ireland…Lane’s spare but precise prose sings…As Colin’s quest leads him from Ireland to the United States, Italy, and back again to Ireland for a poignant conclusion, Lane spins a thoughtful tale of artistic integrity and redemption.” —Foreword Reviews

“Eoin Lane’s Beyond the Horizon is a book for anyone who loves Ireland, loves the sea, and loves art—particularly, the painter’s dangerous romance, or passionate duel, with canvas and paint. Lane’s deep understanding of this process, both its tragedies and its triumphs, animates every page, every word.” —Daniel Hecht, bestselling author of On Brassard’s Farm

“Eoin Lane has crafted an intensely visual novel, capturing a play of light and shadow, and the substance of a life lived on the seam between brightness and grief.” —Neil Hegarty, author of The Jewel

“Eoin Lane uses words like brush strokes as he tells Colin’s story, describing in a painterly way how storm clouds gather on his horizon, buffeting him and those around him. Driven by his creativity he learns cope with loss, love, and friendship, seeking shafts of sun to light his canvas.” —Sarah Maine, author of The House between Tides

“Eoin Lane’s Beyond the Horizon creates a portrait of the inner-life of a man as vivid and striking as any Irish landscape. With graceful, assured prose Lane crafts a moving mediation on trauma, loss, and the redemptive power of art.” —Robert Haller, author of Another Life

“Having known Eoin back when we both started out as painters many years ago, I found Beyond the Horizon interesting to have such a formative experience seen through his eyes. A moving, sensitive first novel that deals with love, loss, and the journey of an Irish artist across the topography of an evolving cultural and personal landscape.” —Gavin Lavelle, Irish artist and owner of the Lavelle Art Gallery

“Eoin Lane’s dual talents as both artist and author are brought together with stunning effect in his novel, Beyond the Horizon. Language and image are artfully combined in this portrayal of the mind and heart of an artist, the obsession that drove his art, and the toll it exacted on his personal life. Poetic, evocative, and rich in visual imagery, this book draws us into the consciousness of the artist, and the elemental forces of ocean, horizon, and sky that shaped his art.” —Brenda Malley, artist

“An artist with natural talent, Colin lives through his senses. There are tragedies, love affairs, and betrayals but it’s his art that carries his life along. A beautiful and poetic debut, I adored it.” —Sue Leonard, Irish Examiner 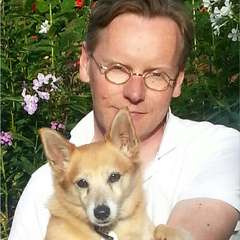 Eoin Lane is an Irish landscape artist and a writer. Previously he has worked in fashion design, historic horticulture, and the heritage sector, and with his partner owned a bistro restaurant and gift shop. He was a winner at the Irish Writers’ Centre Novel Fair in 2016 and has been both short-listed and a prizewinner in the RTE Francis MacManus Short Story Competition. His paintings are represented by a number of Irish art galleries and have been sold to America, Canada, Australia, and India. He lives in County Down, Northern Ireland.

John Keating is an actor, voice talent, and AudioFile Earphones Award–winning narrator. His numerous acting credits include Roundabout Theatre’s production of Juno and the Paycock and La Mama ETC’s production of Cat and the Moon, as well as various parts with the Irish Repertory Theater and the Irish Arts Center. He can also be seen in the HBO miniseries John Adams, starring Paul Giamatti and Laura Linney.