A wrenching psychological thriller in the vein of Tana French’s In the Woods, Jon Bassoff’s Beneath Cruel Waters reminds us that the sins of the mothers are the sins of the sons.

Holt Davidson, a Kansas firefighter, hasn’t been back to his hometown of Thompsonville, Colorado, for more than two decades, but when he learns that his estranged mother has taken her own life, he returns for the funeral, hoping to make peace with her memory. He spends the night at his childhood home, rummaging through each room, exploring the past. But instead of nostalgic souvenirs, he discovers a gun, a love letter, and a Polaroid photograph of a man lying in his own blood.

Who is the dead man? Was his mother the one who killed him, and, if so, why? Who sent the love letter? And what role did his sister, institutionalized since she was a teenager, play in this act of violence? As his own traumatic memories begin to resurface, Holt begins an investigation into his mother’s and sister’s pasts—as well as his own.

“Beneath Cruel Waters is an intense, gripping, exceptionally written mystery thriller that everyone must read. Bassoff has always been one of the best, but this unputdownable novel catapults him to another level.” —Jason Starr, internationally bestselling author of The Next Time I Die

“The antidote to every sappy, saccharine story you’ve ever read. Jon Bassoff is the master of the bleak. No one makes desperate characters and their miserable plights so entertaining.” —Mario Acevedo, author of the Felix Gomez vampire-detective series

“A haunting, lyrical tale of family madness and the sins of the past from which we can never wash ourselves clean. Beneath Cruel Waters is a twisty, page-turning novel that asks profound questions—what are we willing to do for those we love? And what happens to our souls when love leads us to sin?” —Barbara Nickless, Wall Street Journal bestselling author of the Sydney Parnell crime novels

“Jon Bassoff only gets stranger, and better, with each novel. I don’t know what to do with his hypnotic, earthly, yet always surprising voice. I only know there isn’t anything else like it out there. Part mystery, part heartland crime, part horror…Let’s call it nouveau-noir Americana. If you’ve got the stomach for riding the original underbelly of modern fiction and want it high octane, Bassoff’s latest will scratch the itch like only the finest of 100-proof bottles can do.” —Christopher Ransom, internationally bestselling author of The Birthing House and The People Next Door

“Jon Bassoff proves he’s not only a master of horror but can weave a chilling noir. A slow-burning tale of generational suffering that inches its way toward heartbreaking reveals for a family in desperate need of hope and deliverance.” —Aaron Philip Clark, author of Under Color of Law

“Jon Bassoff never wastes a word in this pitch-perfect tooth-chipper of a novel about the frayed realities of the human condition. His prose crafts a claustrophobic and haunted past in order to decipher the pieces of a tortured present. A mesmerizing and satisfying display of storytelling.” —Frank Bill, author of Crimes in Southern Indiana, Donnybrook, The Savage, and Back to the Dirt

“Jon Bassoff’s writing is as gritty as a bloodstained baby blanket. His latest, Beneath Cruel Waters, is a disturbing tale of secrets and sins that challenges the myths at the heart of a most dangerous institution—the family. This relentless exposure of one man’s destructive re-creation of his forgotten past rejects and then recasts assumptions about the redemptive power of forgiveness and the saving grace of the truth. Readers beware. Buckle up for a nightmarish trip through more than one level of American hell.” —Manuel Ramos, author of Angels in the Wind

“I’ve read and loved all of Bassoff’s previous novels, but this one hit me hard. It scars. A haunting, beautifully written, breathlessly tense, dread-filled meditation on guilt and memory that will linger in your mind long after you’ve read it.” —Ivan Kavanagh, director of Never Grow Old, starring John Cusack

“Beneath Cruel Waters is brilliant, dark, compelling, and heartbreaking. The story of Holt Davidson and his journey to uncover family secrets is not only a page-turner, but an immersive character study and an engrossing examination of rural Colorado life. Filled with unexpected twists and brutal truths, the novel will stay with you long after you finish it. Settle in for a new Colorado classic.” —David Heska Wanbli Weiden, Edgar and Anthony-nominated author of Winter Counts

“This is a haunting and disturbing yet compelling novel, in the vein of Jen Williams’s A Dark and Disturbing Place and C. J. Tudor’s The Burning Girls.” —Booklist

“A psychological thriller like no other, Bassoff weaves a tale that is sure to capture the reader’s attention from the opening pages.” —Mystery & Suspense

“A powerful family melodrama drenched in sadness and guilt with hints of redemption.” —Kirkus Reviews

“Beneath Cruel Waters is a cleverly constructed morality tale that grabs hold violently in the first chapter and then gently guides us the rest of the way. In a style reminiscent of Raymond Carver, Jon Basoff is a master at creating a world that’s both simple and complex, a world where most struggle to keep their heads above water, a world of long-buried family secrets that inevitably lead to tragedy.” —Charles Salzberg, Shamus Award–nominated author of the Henry Swann novels

“Jon Bassoff draws you in without being brash about it. The writing is subtle and nuanced, so as the story unfolds, it is a shock that Beneath Cruel Waters is such a disturbingly dark mystery…A chilling, must-read book!” —Book Junkie Reviews 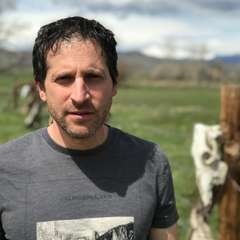 Jon Bassoff was born in 1974 in New York City and currently lives with his family in Colorado. His mountain gothic novel, Corrosion, has been translated in French and German and was nominated for the Grand Prix de Littérature Policière, France’s biggest crime fiction award. He is a connoisseur of tequila, hot sauces, psychobilly music, and flea-bag motels.